2019 Prosecutor of the Year Awards 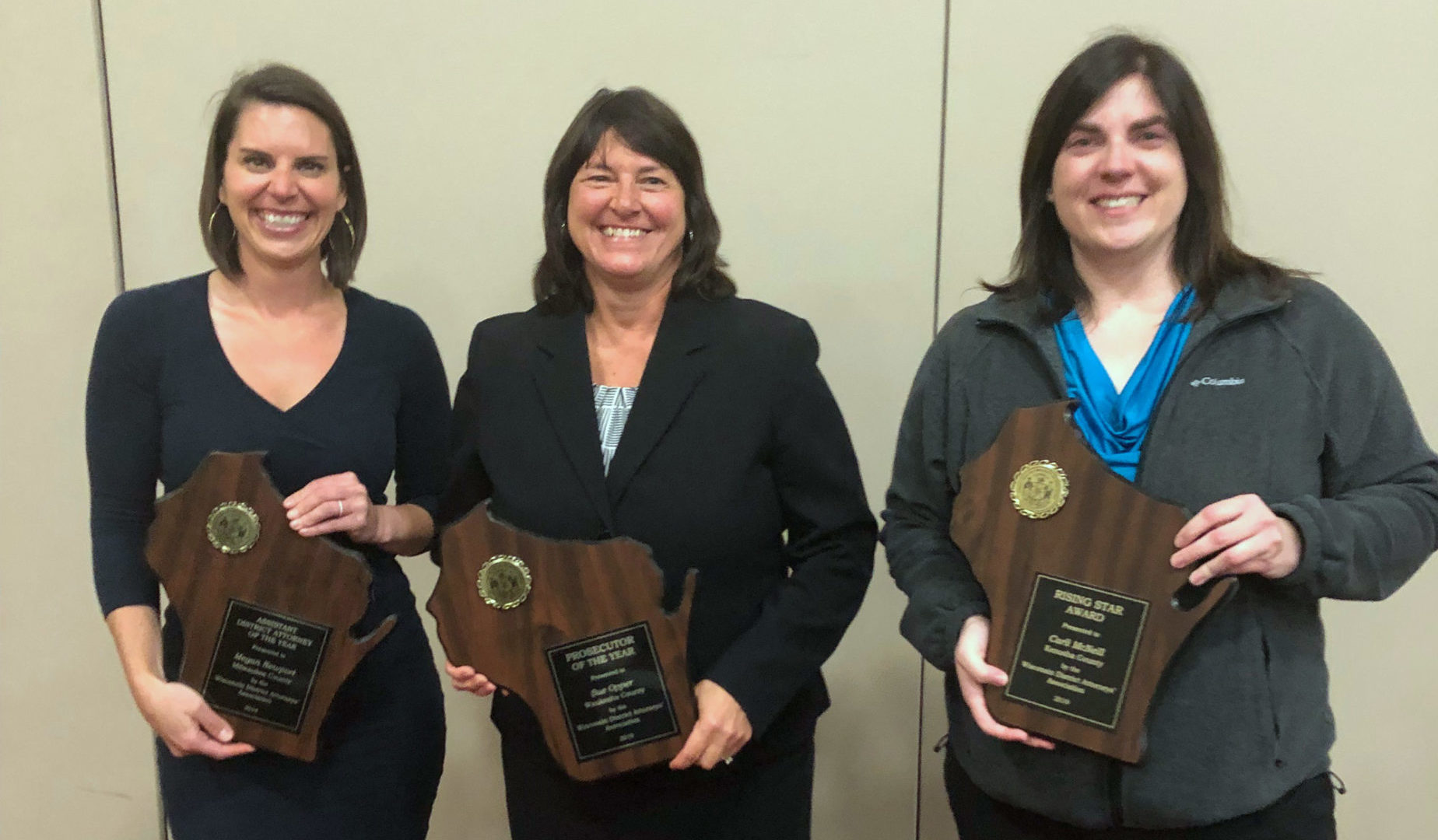 The Wisconsin District Attorneys’ Association (WDAA), an association representing over 400 criminal prosecutors in the State of Wisconsin, is pleased to announce the recipients of this year’s prosecutor of the year awards. . These awards are designed to recognize the outstanding work of a District Attorney, a Deputy District Attorney, an Assistant District Attorney and an ADA with 5-10 years of experience who demonstrates great promise and leadership in the field of prosecution (Rising Star). The following recipients received their awards during the spring State Prosecutors’ Education & Training conference held in Green Bay, Wisconsin, May 5th to May 10th 2019.

Waukesha County District Attorney, Sue Opper, is the WDAA’s 2019 Prosecutor of the Year

In a nomination supported by 18 members of her office, the Menomonee Falls, Muskego, Oconomowoc, and Village of Pewaukee Police Departments, Chief Judge of the Third Judicial District, District Three Court Administrator, three Circuit Court Judges, and Waukesha County Justice Services Coordinator, DA Opper is described as an extraordinary administrator and trial attorney. She is credited with transforming her large office’s case filing system into a paperless one, creating huge efficiencies for many partners in the criminal justice system. She also assisted in securing two US Department of Justice grants – one to create a Deferred Prosecution program for 150 low-level offenders who are suffering from opioid addiction and the other to fund a domestic violence prosecutor with the result of increased convictions and significant prison sentences for the county’s most violent domestic abusers. DA Opper is described as a natural leader with humility and a sense of humor, accessible to her law enforcement partners and an excellent collaborator. In the letter of support from her staff, it is stated: “DA Opper exhibits the best in us, and it is through her leadership that the DDAs and ADAs who work under her, and for her, attempt to emulate their careers after her.”

Nominated by Kenosha County District Attorney Mike Graveley, ADA Carli McNeill is described as the hardest working prosecutor on a daily basis that he has worked with in his entire career. DA Gravely likened ADA McNeill’s prosecution career to her college athletic career (women’s hockey) in that she comes to work every day ready and willing to work harder and get better, even in the smallest increments, and as such has become one of the strongest litigators and leaders within the office. She works diligently with law enforcement to improve every case that reaches her desk. Her work ethic and dedication have resulted in her trial record for successful verdicts being one of the best in the office. She has also taken on additional duties including supervision of all law clerks and interns and managing the external community relations to ensure the DA’s Office maintains a positive presence in the community.

ADA Megan Newport joined the Milwaukee County DA’s Office in 2007 straight out of law school. She is currently the Team Captain for the North Central High Intensity Drug Trafficking Area (HIDTA) and as such works on the most serious drug trafficking cases in the state. Between January and June 2018, HIDTA targeted a large scale drug trafficking organization, which involved 21 search warrants and 24 arrest warrants. ADA Newport was the prosecutor responsible for guiding the investigation, which resulted in the seizure of over 75 firearms, two kilograms of heroin, various amounts of cocaine, and over $1.3 million in drug money. A shooting and/or firebombing of a Milwaukee residence was prevented as part of this intervention. In the past year, ADA Newport also prosecuted complicated interstate carjacking crews. In nominating her, ADA Patricia Daugherty noted that there was no occasion in their decade of work together where ADA Newport did not display the highest prosecutorial and professional ethics. HIDTA Taskforce Officer Nick Stachula stated: “Megan Newport has been instrumental to the success of North Central HIDTA. [She] is the prime example of what a prosecutor should strive to be.” Fellow ADA Hanna Kolberg said of ADA Newport: “In addition to her staggering caseload, ADA Newport carves out time each day to answer endless questions and provide endless guidance to law enforcement, with whom she enjoys a stellar reputation…[Her] work as a prosecutor is more than just a job to her, she has truly made it her way of life.”

Skip back to main navigation

Dues/donations are not tax deductible.